Before retiring recently, Tim King of The Coal Authority produced an excellent paper on the hazards of coal mining legacy and designing and interpreting a suitable ground investigation to assess the risks fully as part of an all encompassing Coal Mining Risk Assessment.

The paper includes excellent photographs from UK Coals surface mining projects that allows the reader to visualise the hazards in the subsurface, and how key features could easily be missed or misinterpreted during ground investigation that could have significant implications to future built development at surface with regards to ground stability.  The paper demonstrates the need to appoint highly experienced teams conversant with coal mining risks when dealing with coal mining legacy issues to ensure coal mining risk assessments are completed competently and sites are redeveloped safely.

We thought the paper was so good, we are reproducing it in full here, with kind permission from Tim and The Coal Authority.

“When a ground investigation (GI) is undertaken to determine the extent of coal extraction of shallow seams the results are often confusing. When people talk about shallow workings, broken ground, voids, etc, I imagine that everyone has their own visual image as to what that entails.

Exposure of coal seams during surface mining operations gives a real insight into how coal was worked in the past. Information gained from a GI inevitably leads to second guessing how the seam was worked.

Cored boreholes give the best data but open boreholes are more cost-effective particularly on big development sites. Understanding the drillers’ logs is essential in painting the best picture as to what ground conditions exist beneath a site.

Below are some images taken during opencast operations.  What are they telling us? 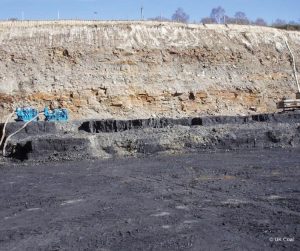 A fairly level coal seam of a good thickness overlain by blocky sandstone under a stiff boulder clay.

If we take a closer look what do we see now? 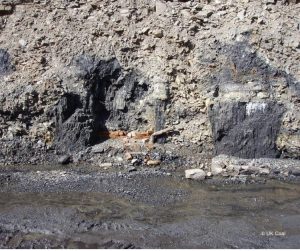 Pillars of coal with collapsed material or broken ground between them. The broken ground appears to consist of collapsed sandstones/mudstones that sit directly above the coal. They demonstrate no competency having collapsed soon after support was withdrawn.

Imagine a grid of boreholes designed to capture the extent of coal extraction. It is quite feasible that a grid interval is adopted that coincides with the pillar interval, subsequent results indicating that coal is present in all boreholes suggesting that coal has not been worked. In reality that is not the case. This shows the importance of staggering the grid to obtain more accurate information.

Let’s take an even closer look to see if the photograph is telling us more. 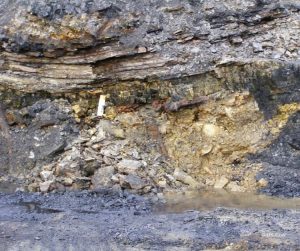 Here, collapse has occurred filling the void but the overlying strata has sagged rather than collapsed. Evidence of bed separation perhaps?

If an open hole borehole was drilled between the pillars the driller would probably record ‘broken ground and loss of flush’ as the drill bit encountered the separations in the stratified layers and the unconsolidated collapsed material.

If an open hole borehole was drilled over the pillar what would we expect? Would we expect intact strata? I would say yes. However look again at the second photograph, see how the strata immediately above the pillars is drawn into the collapse. The driller may again record ‘broken ground and loss of flush’.

In the next photograph our grid of boreholes would encounter solid coal until it hit a stowed roadway with a coal roof. How difficult would that be to interpret? 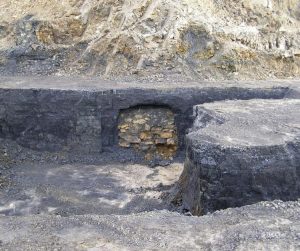 The photograph below shows the line of an arched roadway driven in coal. Again unless you struck a steel arch I think that no one would identify that! 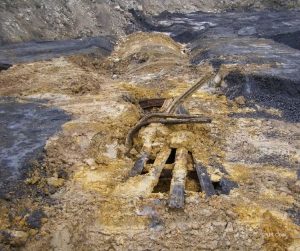 The next photograph shows a shaft that has been uncovered. If it was an unrecorded shaft then drilling directly above it would be extremely dangerous, not knowing if it was filled throughout its depth or filled above a manmade staging. 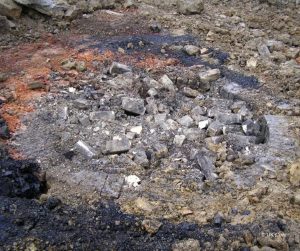 The next photograph demonstrates the irregular size and shape of pillars.

Look at the remnant coal stump. How has that survived without being crushed? 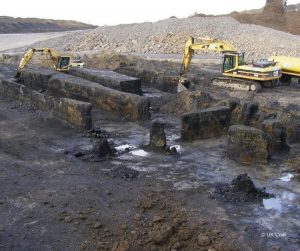 The answer is it has gained support from the collapsed material that filled the voids. The other question that has no sensible answer is why was it left and not taken out at the time.

These are some of the conundrums that drillers, engineers and geologists are faced with. We rely on their knowledge and skill to interpret often confusing data”.

Photos and Article: reproduced with kind permission of UK Coal and The Coal Authority

An excellent article by Tim on the challenges faced when trying to understand the subsurface that has been altered during coal extraction, and the challenges faced by teams dealing with coal mining risk assessment.  It highlights the importance of appointing teams with a detailed understanding of mining risk to ensure sites are developed safely and also pragmatically, to ensure long term success and to minimise cost and time challenges as projects move forward.

If you want to read more about Coal Mining Risk Assessment have a look at our services page here. 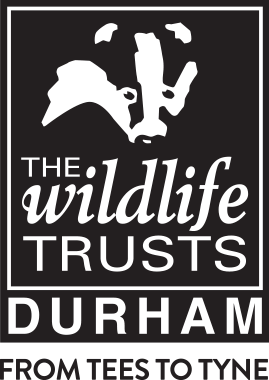 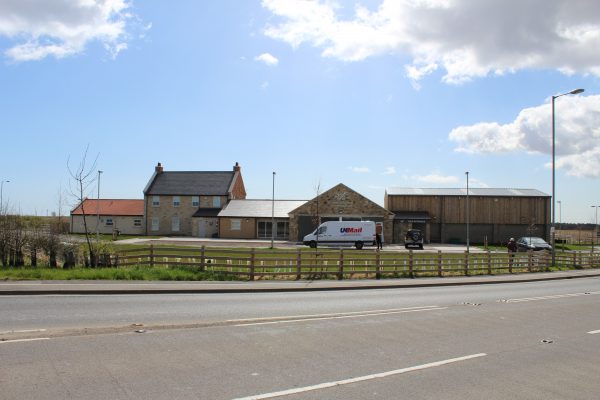